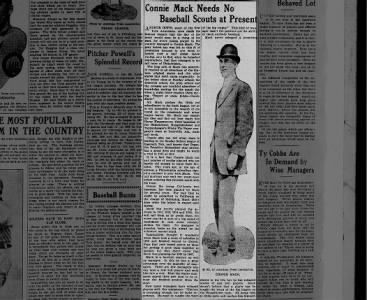 [Editor’s note: My latest book review will run next Friday. Going forward, this series will alternate Fridays with my book review series.]

In baseball lore, Branch Rickey is credited with creating the modern farm system, deducing while as general manager of the St. Louis Cardinals that it was cheaper to develop his own prospects than buy established players. It was a brilliant idea and Rickey’s largely responsible for the modern farm system, though he wasn’t the first person to develop cheap young players to save money. In the 20 years or so before Rickey began buying up minor league teams en masse, eventually controlling 800 players and 32 farm clubs, legendary Philadelphia Athletics manager Connie Mack built a dynasty around youth.

In the early years of the Athletics, Mack skippered some of the Deadball Era’s best teams, winning six A.L. pennants and three World Series in the league’s first 14 years, primarily with players he discovered on school grounds and sandlots and developed into stars.

The A’s were a young team, with the average player on their 1914 club 25.7 years old, the second-youngest average in the American League. Their 1911, ’12 and ’13 teams were all youngest or second-youngest as well. [For reference, the 2014 A’s were 29.5 years old on average, the fourth-oldest team in the majors. For a small market club with frequent turnover and a penchant for trading stars for prospects, Oakland was peculiarly old this year.]

Mack’s Deadball Era A’s teams featured a number of teenagers. He signed future Hall of Famer Eddie Collins out of Columbia University months before his 19th birthday in 1906. He got Stuffy McInnis, one of the greatest fielding first baseman of the Deadball Era, at 17 in August 1908. Mack also signed a trio of prominent pitchers before their 20th birthdays: Bullet Joe Bush at 19; future Hall of Famer Herb Pennock at 18; and Rube Bressler, whose pitching arm quickly went bust, at 18. All made valuable contributions to the A’s first dynasty that ran through 1914.

Mack dismantled his contender after a few prominent A’s jumped to the upstart Federal League in 1915. He went with a slightly different philosophy in building the A’s second and final great team a decade later. While Mack signed 16-year-old Jimmie Foxx in 1924 and brought in other young players as well, the great A’s teams of the late 1920s featured more veterans with 40-plus future Hall of Famers Ty Cobb, Tris Speaker and Eddie Collins all seeing playing time for the ’28 A’s.

A slew of veterans on-hand, the A’s once again became a championship club, thriving until the Great Depression once more forced Mack to sell players off. This time, Philadelphia stayed in the cellar.