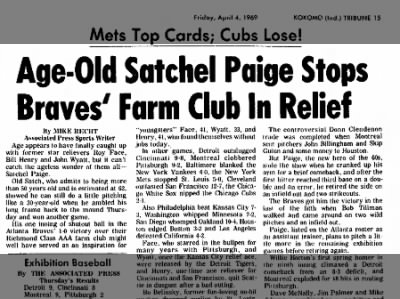 Satchel Paige appropriately titled his 1962 autobiography Maybe I’ll Pitch Forever. The Hall of Famer pitched professionally in five decades, debuting in the Negro Leagues in 1926 and pitching in the minors as late as 1966. He famously threw three shutout innings at age 59— depending on the source– in 1965 for the Kansas City Athletics, sitting on a rocker between innings and sipping lemonade.

As it turns out, Paige had a little more left in his arm.

Newspapers speculated that Paige might pitch again when the Atlanta Braves signed him in August 1968 as a coach so that he could log another 158 days in the majors and qualify for the pension plan. “I’ll just have to see if I can unfold,” the 62-year-old Paige said. “If I can throw half as good as I could last year [in a few exhibition games], then I know I can still get ’em out.”

As Paige biographer Larry Tye noted in a 2010 retrospective for the Atlanta Journal-Constitution:

They called Satchel a trainer, but “he didn’t do any training,” recalls Dave Percley, the Braves’ real trainer. What he wanted to do was pitch. [Braves owner William] Bartholomay was concerned about his eyesight, “which was going pretty rapidly. We worried that he wouldn’t see a line drive coming back to him.”

Nevertheless, Paige pitched in an exhibition on September 29, retiring future HOFers Hank Aaron and Don Drysdale. He got six outs on just 12 pitches.

Paige qualified for the pension in February 1969 when the needed time of service in the majors was cut from five years to four. Shortly thereafter, Paige announced he would make a series of one-inning appearances in a few exhibitions and then retire again. “I can still throw harder than half the pitchers here,” Paige said. “I can still pitch. You better believe it.”

Paige’s chance came April 3 during an exhibition between the Braves and their Triple-A Richmond team. Paige pitched for Atlanta and overcame a fielding error from Aaron that allowed a runner to reach third. He worked his way out of the jam by striking out two Richmond batters, getting credit for the victory. The following day, he threw another scoreless inning.

Paige being Paige, his talk of retirement didn’t stick. He pitched again on June 5, this time for Richmond in an exhibition against the Braves. He allowed two runs in one inning.

The following week, The Daily Times of Salisbury, Maryland carried an interview with Paige where he spoke of wanting to be in the Hall of Fame:

The whole world wants me in it. But I didn’t play in the major leagues long enough– that’s how it’s wrote up even though for years and years I was the world’s greatest pitcher.

Maybe some day I’ll fall into the Hall of Fame, like I done the pension. But I’m not sayin’ they’d change the rules for me. Maybe some day before I die I could sorta sneak in. You know, for good conduct or something like that.

Paige got his pension. The same year the salary kicked in, 1971, he became the first Negro League inductee in Cooperstown.

Others in this series: ‘Is Babe Ruth hurting game?’ | When Mark Koenig pitched | 25 years after Pete Rose, Hal Chase’s story is bleaker | Outrage when the Yankees sold to CBS