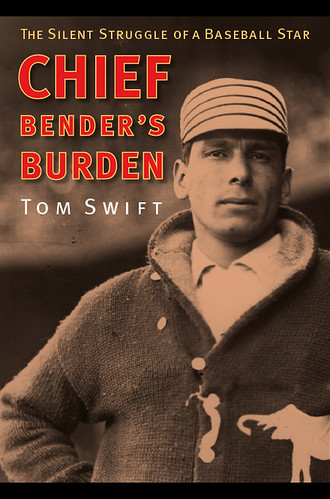 In January, I had a rare, wonderful day of research that any writer may know, a stretch of hours where time suspended for a great chase.

I decided not long before to write a book on Joe Marty, a ballplayer from my hometown, Sacramento. Marty came up in the Pacific Coast League with Joe DiMaggio and was considered the better prospect, though he didn’t fulfill his potential. He played in the majors from 1937 to 1941, then went to World War II and played the rest of his career with Sacramento in the PCL.

One day in January, through hours and hours of research online, I verified four of Marty’s big league teammates were still living, all in their nineties. One man died a couple weeks later, but of the remaining three, I have since interviewed one, mailed questions for another, and need a phone number for the third (his name is Al Monchak, and if anyone has any ideas, please email me.)

My inspiration? Chief Bender’s Burden: The Silent Struggle of a Baseball Star, a 2008 biography by Tom Swift on the Hall of Fame pitcher. I received a copy in December and flipped to the acknowledgments not long after where Swift notes, “I sought anyone who could remember being in the same room with Charles Bender. It’s a small club.”

Marty last played in the PCL in 1952 and died in 1984, so it’s not difficult to find men who knew him. Swift faced a greater challenge since Bender played all but one game of his big league career between 1903 and 1917 and died in 1954, leaving no descendants. But to reference Teddy Roosevelt, I think Swift did a good job with what he had where he could.

The 2009 winner of the Seymour Medal from the Society for American Baseball Research — which Swift and I belong to — the book features exhaustive research. The main story spans 290 pages followed by a 36-page bibliographical essay that summarizes what is apparent throughout: Swift gathered every possible Bender detail, scouring microfilm of long-dead newspapers like the Philadelphia North American and chasing interviews. I venture Swift had many days like the magical one I experienced. His research sets a standard for me to live up to with my book.

Swift captures a seemingly complete portrait of Bender, good and bad. While noting his masterful pitching and ability to read opponents tipping their pitches, Swift also documents Bender’s lifelong drinking and that he killed a pedestrian while driving. A writer can easily neglect to seek these details.

The memory is precarious. A middle-aged man can seemingly remember precise details of the moment as a child he was stung by a bee and yet still forget where he left the car keys fifteen minutes before he had the recollection. Perhaps the vivid memories are so only because we’re fooling ourselves. The past is obscure, a convincing imposter (sic), too often remembered differently by different people. But sometimes you don’t need to be able to verify everything to find truth. Joe Astroth knows that Charles Bender’s life influenced his own.

My quibbles with the book are minor. Basically, I wanted more about the prejudices Bender faced as a Native American ballplayer. It’s what drew me initially. While the book notes racist coverage Bender received, more words recount game highlights. I understand such details are obligatory with sports-related books, but I don’t think they offer the most sensational story. The book didn’t hook me until the final chapters. There’s a reason I’m reviewing a book in mid-June that I received in December, though in fairness, I also have a short attention span. The Boys of Summer is a personal favorite, and I needed a year to finish it.

Swift writes in the bibliographical essay, “In Bender’s case, the usual fog of baseball legend and lore has been layered with the reality that he lived and played in the face of untold prejudice. That he was seldom asked about the most important aspect of his life story means a full portrait is categorically impossible. I have tried simply to present the closest thing I could.”

Fair enough, though I’d love to see what Swift can do with a contemporary subject. I think Swift chose Bender since he was born in his native state, Minnesota. Perhaps a biography on Kirby Puckett, a tragic figure there, could be in order.