A few weeks ago, I did a post here on a DVD, “Around The League: 1939-1946” compiled from 8 mm color footage shot by Washington Senators and Cleveland Indians outfielder George Case. I got a fun story with great anecdotes from Case’s son George Case III and good still shots from the film. The one thing I lacked when I posted my original piece was a good clip from the DVD.

However, with the help of Case III and the DVD production company, Delaware Digital Video Factory, there is now a two-minute, forty-eight second clip online. I encourage anyone who would like to see color footage of Joe DiMaggio and Ted Williams taking batting practice in 1940 to check out the guest post I wrote for Seamheads.com, which is also running a podcast today with Case III.

Let me know what you think! 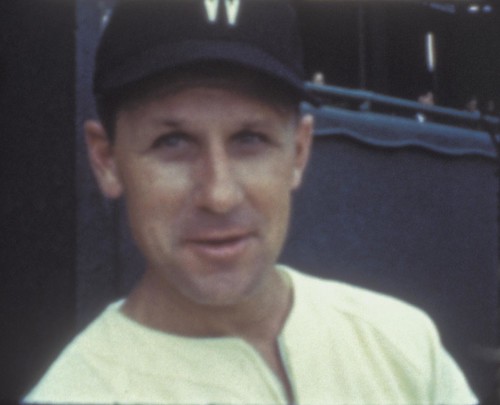 Ossie Bluege of the Washington Senators in 1939 (George Case)

Every year when George Case returned from another season of baseball, it was time to show his movies.

The four-time American League All Star outfielder, who played for the Washington Senators and Cleveland Indians from 1937-1947, loved 8 mm color film. He shot footage of his family, duck hunts and, most significantly in historical terms, his playing career.

Case died in 1989 at 73 from emphysema but the five-time Major League stolen base champion lives on as the voice of a 37-minute color documentary, “Around The League 1939-1946,” compiled from the footage. His son George Case III, former executive director of the Society for American Baseball Research, produced a VHS version in 1989 and put in on DVD in 2008 (he’s selling copies for $35.95; anyone interested can email him at case67@verizon.net)

“I still have the original 8 mm film,” Case III said, “But I mean, it becomes very fragile over the years, so you put it on another tape, and it will last a lot longer. And that was my whole purpose of this, which was preserve it for future generations. I thought it was of great historic value and the fact that it’s color and then my dad’s commentary on there. You don’t really ever hear too much in the way of a former ballplayer talking about the scenes of a film.”

Color film footage of baseball prior to World War II is rare, the sport’s early days often captured in black-and-white newsreels. Case’s hand-held shots of various legends in Wizard of Oz-style technicolor (he got the Kodacolor 8 mm film from a friend at Eastman Kodak) are at once amateur, raw and surreal. I’ve never seen anything like this, and if anyone knows of similar work, I’d love to see it.

Case III said he has tried various methods to convert the 8 mm film into still shots. Two he’s been successful with are here, including another shot from 1939, Senators pitcher Ken Chase: 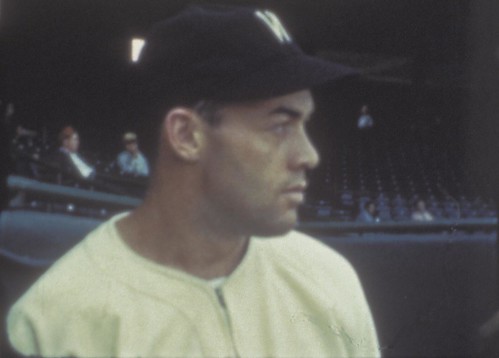 Case provided the narration a few years before his death and introduces us to many teammates in Washington where he played ten of his eleven seasons. He also tells as we watch Joe DiMaggio, Hank Greenberg, and Ted Williams take batting practice and Lefty Grove and Jimmie Foxx sit together in the Fenway Park dugout in 1940. We see two presidents, Franklin Roosevelt and Harry Truman, plus a weigh-in for boxing champ Joe Louis in the bowels of Griffith Stadium and a dash between Case and Olympic sprinting legend Jesse Owens (Owens wins.)

It’s the kind of history that was a matter-of-fact part of life for Case III growing up. Longtime Washington Post sportswriter Shirley Povich was a family friend. Two-time American League batting champ Mickey Vernon was Uncle Mickey (he also told Case III that he was listed in the phone book as James Vernon, saying, “Hey George, nobody knows my first name is James, not Mickey.”)

One natural question is why more people haven’t seen the bulk of this film beyond old ballplayers and their descendants, some of the chief customers. Case III said seven minutes of footage aired on HBO in 1991 and 1992, under exclusive agreement, in the first two segments of the three-part series, When It Was a Game, with his father’s narration dubbed over. He says a VHS copy of his film is in Cooperstown and he will donate a DVD too.

Case III said he called to offer Ken Burns the film for his Baseball mini-series that aired on PBS in 1994 and was in production for a number of years prior. However, Case III said he was shunted off by an assistant, and by the time Burns personally called to say the footage was exactly what he needed, the exclusive agreement had been made with HBO. (I emailed John Thorn, who served as senior creative consultant to the Baseball mini-series and spent a few years in the editing room. I asked if he knew anything about this and could offer insight. Thorn replied, “Nope.”)

I’ll close with a 16-second silent clip Case III let me use. It shows Nick Altrock, the Clown Prince of Baseball and a Senators coach, performing part of a routine with another member of the club in 1940. My friend Jose shot it with his camera phone as it played on my TV, so the footage is grainier than what’s on the DVD but I don’t think this entry would be complete without it:

[Update 6/21/10: I wrote a guest post for Seamheads.com that includes DVD-quality color footage of Williams and DiMaggio from 1940. The clip below stays for posterity.]