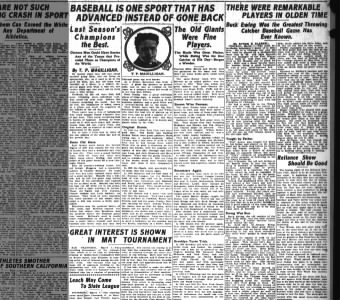 Bill James has a recurring feature in at least a few of his books called “Old Ballplayers Never Die.” The idea is that for almost as long as baseball has existed, former players have lamented the decline in play. For instance, in his 2001 historical abstract, James included an excerpt from an article 1890s standout Bill Joyce wrote for the 1916 Spalding Base Ball Guide. Joyce concluded:

“It makes me weep to think of the men of the old days who played the game and the boys of today. It’s positively a shame, and they are getting big money for it, too.”

Conversely, James also notes that for almost as long as baseball has existed, there have been people who would say that the latest version of the game is the greatest. Today’s edition of this column concerns an example of this latter trend, from a 1908 article in the Oakland Tribune. It begins:

“No matter what they tell you about baseball going back and not being as spectacular, etc., as it used to be in the good old days, you just tell them that baseball, as a whole, is a mighty improved game over what it was ten, aye twenty years ago, and you’ll not be more than a mile wrong.”

The article and several accompanying pieces then highlight several stars of the late 19th century. It’s a neat series of articles.

I go back and forth on the question of whether today’s player’s are better or worse. To be blunt, I don’t know if it matters. Every generation of baseball has had players worth celebrating, ones who could perform astonishing feats. Near every generation of baseball has also been vastly different than the one that preceded it. I think that various individual statistical feats that seemingly point to declines or increases in quality of play are more evidence of whatever the current rules and trends are in baseball.

There is, of course, a far broader debate that could be had here. I’ll look into this more another time, though the comments are open.

4 Replies to “From the archive: Baseball’s eternal debate”