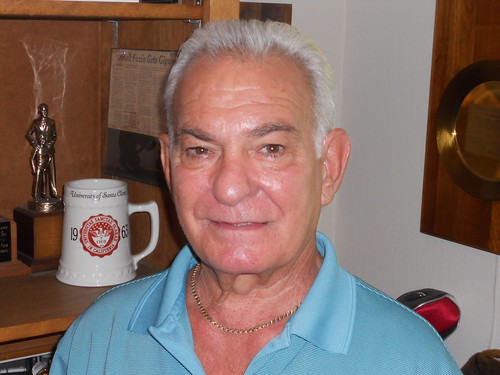 By all appearances, Ernie Fazio is doing well.

Decades removed from baseball, the former Houston Colt .45’s and Kansas City Athletics infielder lives in Alamo, California in a sprawling house currently listing for $1.5 million. This past weekend found him celebrating news of his daughter’s engagement to a son of former Oakland Raiders offensive tackle John Vella. At 68, Fazio says he is in good health and looks it too.

So why did Fazio sue Major League Baseball? Fazio is among 872 players who don’t qualify for a pension or health benefits. I learned of Fazio from Douglas J. Gladstone’s book, A Bitter Cup of Coffee, available on his Web site, which follows these ballplayers’ efforts to obtain benefits. Fazio has a good life. Not every player in the book is so lucky.

Fazio said he’s been involved for two years in a lawsuit for benefits. Prior to that, Fazio was a lead plaintiff in an unsuccessful 2003 suit against baseball. “I’m doing it for the other players,” Fazio told me during an interview at his home Monday. “Everybody that played in the major leagues should be vested.”

Starting in 1947, baseball offered pensions to any player with five years service. In 1969, this was lowered to four years. Then in 1980, the stipulation for vesting changed to one day of service for health benefits and 43 days for a retirement allowance. But the changes weren’t retroactive, so Fazio and others who played less than four years between 1947 and 1979 got nothing. Their brief careers were what’s termed in baseball as cups of coffee, and Gladstone writes, “One might even suggest that these men gulped bitter cups of coffee.”

Fazio received $100,000 from Houston upon signing in 1962, and he said he invested, which helped him buy his house 35 years ago. He’s worked primarily in sanitation since leaving baseball. Other players affected have had varying levels of success. Some stories are moving: men disabled from playing, others facing illnesses without help from baseball.

Count Gladstone among their supporters– his views are clear from the outset of his polemical, engaging book. Gladstone told me independent houses were interested in publishing his 192-page work in 2011 but he chose to self-publish in April because time matters. Dave Marash writes in the foreword:

This is all about 874 former players, all of them now at least middle-aged. None will ever play again, and every year, they are dying off…. And, as of now, they are getting little or nothing from the game they loved. Fixing this inadvertent injustice can be done, if both the owners and [the] players decide to do it. It will cost them marginal money to do so. They say they’ll look at it in their next 2011 negotiation, but they should stop looking and start acting now. A simple side agreement could be executed anytime.

I admire Gladstone’s advocacy, though I have less faith the economics would be simple, especially in these tough times. Giving 900 men, say, a $5,000 pension would cost $4.5 million annually, even if this would gradually decrease to nothing as players die. As Gladstone writes, baseball has no legal obligation to provide assistance, and while it would be admirable, I understand why it wouldn’t be feasible.

I support universal health care, though and until America does too, I think baseball should help its former players. I understand this is a polarizing issue, and I generally strive to keep this site free of politics, though I will say that to stand idly by while non-vested players grapple with medical woes doesn’t just seem petty, cheap, or cold. It seems inhumane.

Baseball could grant medical coverage to these men– it can do whatever it wants, really– or if it insists on following the 1980 agreement, I have another idea: Why not give the non-vested players another cup of coffee?

As mentioned earlier, it takes one day in the majors for someone to qualify for lifetime medical coverage. There are currently 872 non-vested former players and 30 big league teams, so in September, when rosters expand from 25 players to 40, each team could offer these men one-day gigs as coaches or even inactive players. It would mirror an event Gladstone writes of when teams gave signing bonuses to former Negro League players who fell short of vesting requirements. Under my idea, with each team helping about 30 players over the season’s final month, this could get knocked out by playoff time next year.

It might not be quite what Gladstone, Fazio, and others are aiming for. But this cup of coffee wouldn’t be nearly so bitter.

One Reply to “Book review: A Bitter Cup of Coffee by Douglas J. Gladstone”