With Memorial Day-themed posts abounding elsewhere, I figured I’d do something different here. I’ve had an idea for an occasional post examining a random date in baseball past and finding a story in it. Part of the magic of the Web is that such baseball research is made easy by sites like Retrosheet.org, which offers box scores dating to 1871. I looked at the schedule from May 30, 1911, and something stuck out. One hundred years ago today, a troubled, young pitcher named Bugs Raymond won the last game of his big league career. He’d be dead barely a year later. 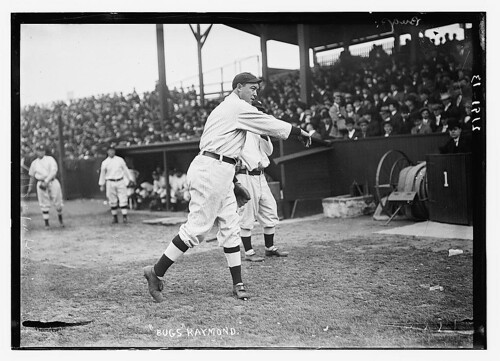 Fans who’ve read Lawrence Ritter’s The Glory of Their Times or watched the Ken Burns Baseball miniseries, may be familiar with Raymond, who pitched six years in the majors between 1904 and 1911, going 45-57 with a 2.49 ERA. Former New York Giants teammate Fred Snodgrass told Ritter, “Bugs drank too much and came to an early tragic end, but when he was sober, and sometimes when he wasn’t, he was one of the greatest spitball pitchers who ever lived.”

At his peak, Raymond went 18-12 with a 2.47 ERA for the Giants in 1909, though he quit the team six weeks before the season ended to tend bar. Such behavior was emblematic of his short, mercurial career. “Bugs drank a lot, you know, and sometimes it seemed the more he drank the better he pitched,” another Giants teammate, Rube Marquard told Ritter. “They used to say he didn’t spit on the ball; he blew his breath on it, and the ball would come up drunk.”

By 1910, as Raymond’s SABR biography notes, his alcoholism had progressed enough that Giants manager John McGraw hired a former New York City policeman to track Raymond. The ex-cop quit after sustaining a black eye from the pitcher. McGraw became reluctant to give Raymond money for fear it would be spent on alcohol, and fellow Giants were forbidden from loaning to Raymond. McGraw refused even to give Raymond unopened packs of cigarettes, as they could be pawned to buy booze.

Nothing could keep Raymond sober long, not a wife, children, or a promising career, as it so often goes with alcoholics. The Giants sent Raymond off for treatment prior to the 1911 season, though he was kicked out for horseplay. He rallied physically and emotionally for a time, with a couple slips in spring training. Still, Raymond would fully relapse by mid-season and be booted in June from the Giants, who’d win the National League pennant in his absence. As Raymond’s career and life was bottoming out came the brilliance and madness of May 30, 1911.

Raymond got the start that day in the second end of a doubleheader against the Brooklyn Superbas, and he had a one-hit shutout going when he was lifted for Red Ames with two outs and no men on in the fifth. The New York Times reported Raymond had to go to the dressing room with stomach pains because he ate a strawberry sundae before the game (“It begins to look as if ice cream is another dish which Bugs will have to cut from his menu,” the Times noted in its writeup of the game.) Ames blanked Brooklyn the final 4-1/3 innings, giving New York a 3-0 win and Raymond his sixth and final victory that year.

Raymond pitched five more times in the next three weeks, with two losses to drop his record to 6-4. In his final appearance on June 16, Raymond went six innings against St. Louis in relief walking six and allowing four earned runs for the loss. McGraw later dismissed Raymond from the Giants after he disappeared from the bullpen during a game against Pittsburgh and turned up at a nearby saloon. It was the last of many clashes between the two men. When Raymond died, McGraw reportedly said, “That man took seven years off my life.”

Like another oft-inebriated ace from those days, Rube Waddell, Raymond didn’t live long after drinking his way out of the majors. By now separated from his wife, Raymond returned to his boyhood home of Chicago. He played some semi-pro and outlaw baseball, worked as a pressman, and on September 7, 1912, he was found dead in a meager hotel room. Raymond died from a cerebral hemorrhage, thought to be the result of two recent brawls. He was 30.

“On this day in baseball history” is a new, occasional feature here. Today marks the first appearance of this column.