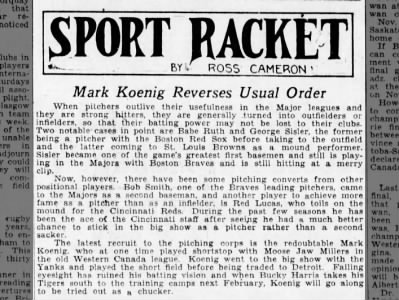 I’ve known of Mark Koenig as a shortstop from the Murderers Row Yankees of the late 1920s. One of my acquaintances through the Society for American Baseball Research, Rick Cabral even got to interview Koenig in the early ’90s when he was the last-living member of the team. Therefore, I was struck during my research a few weeks ago on position players who’d pitched to note that Koenig had made a few mound appearances in the 1930 and 1931 seasons. As has happened with so many position players who pitched, Koenig got rocked.

There was still some optimism when this piece ran October 11, 1930 in the Winnipeg Tribune. Never mind that Koenig was the owner at that point of a 10.00 ERA after nine innings spread through two appearances for the Detroit Tigers at the end of the 1930 season, including a September 27 loss to the lowly Chicago White Sox. Optimism springs eternal during the offseason in baseball, when every player seemingly resolves to return the next spring in the proverbial best shape of their life. Koenig’s pitching career lasted three more appearances the next season, with him walking 11 batters over seven innings.

In a sense, though, Koenig got lucky. The article above mentions that Koenig was switching to pitching because failing eyesight had ruined his batting vision. Over the remainder of his career, Koenig offered just a .662 OPS and 78 OPS+. But these stats didn’t exist in the early 1930s, of course and the high scoring environment of that era also helped mask Koenig’s offensive deficiencies. He hit .277 over his final six seasons, a respectable figure for a shortstop in those days, retiring in 1936. Near the end of Koenig’s career, the Brooklyn Daily Eagle celebrated the veteran, suggesting his mental reactions, rather than his eyesight had been at the root of his hitting problems.

The Eagle also noted of Koenig:

With the idea of ailing eyesight preying on his mind, he decided to try pitching, where you didn’t have to have such sharp sight for snaring hot grounders. He started a few games on the mound for the Tigers, but didn’t do very well, although he claims he would have got by if he had concentrated on his hurling. But Mark wasn’t that kind of ballplayer. He was always being shoved into some spot in the infield when the occasion arose, and the occasion arose very often.

Ultimately, as it’s been for so many position players who’ve taken to the hill, pitching proved but a footnote for Koenig’s long tenure in the majors.

Others in this series: 25 years after Pete Rose, Hal Chase’s story is bleaker | Outrage when the Yankees sold to CBS

One Reply to “From the archive: When Mark Koenig pitched”